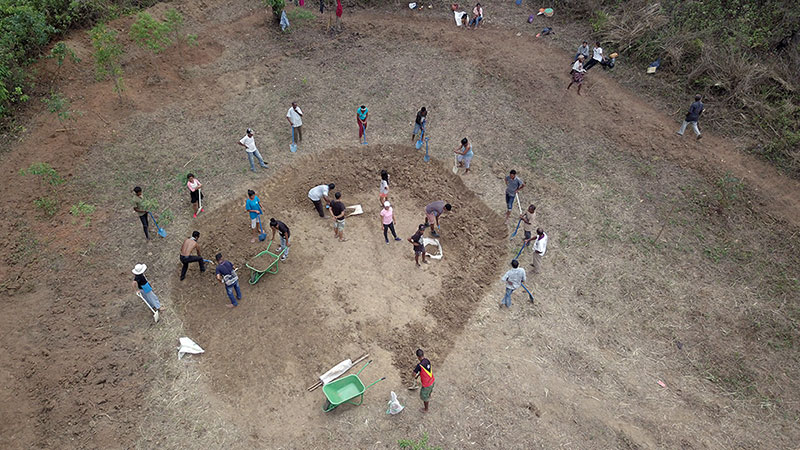 A big-picture response to flood crisis

In April this year Timor-Leste was hit by a severe cyclone, causing widespread flooding and damage. Most of the capital Dili and other coastal towns were badly flooded, with many houses washed away and many more badly damaged. Agricultural land was devastated, roads and bridges destroyed, and most communities cut off from supplies and support.

In response, Permatil TL shifted its focus to the immediate humanitarian crisis and joined in with emergency relief efforts to provide food and other materials. Permatil Global also opened a fundraising campaign to offer financial assistance, raising over $6,000 to support this work on the ground.

After this initial response, it quickly became clear to the Permatil TL team that much of the flooding and damage could be reduced – or even prevented – in the future if better land and water management practices were in place high in the watershed. Permatil TL had already been doing vast amounts of spring restoration and water management work, and so began exploring how this work could be used in flood-affected regions.

With a new focus on how flooding tragedies could be avoided, Permatil TL Director Ego Lemos said the team is now using donated funds to work directly with communities to help safeguard them for the future.

‘After a while Permatil TL started to collaborate with the local authorities and communities on water catchment restoration projects,’ he said. ‘Permatil TL provided food and expertise, and together with the communities we planted around 120,000 tree saplings, dug 28 swales [water catchment trenches] and constructed 6 mini earth dams/reservoirs.’

‘From early June up to now, Permatil TL still took part in flood relief support by providing local communities with food, but we’ve combined this support with a focus on environmental rehabilitation activities such as creating more swales, earth dams or reservoirs, and planting trees,’ he said.

This work will indirectly help over 1000 families across 35 villages and sub-villages throughout Timor-Leste, including in the Dili, Aileu, Manatuto and Ermera districts. And with the potential to help even more people and communities strengthen their resilience, local government authorities are keen to support ongoing projects.

‘Government has been very receptive to this work and is enthusiastic to expand projects in the future,’ Ego said. ‘Permatil Global is working towards securing future funding opportunities, not just to expand projects but also to create complementary education resources to help grow and accelerate the impact across communities.

‘It is clear that these projects can help reduce future flood problems, secure local water supplies, provide future income through agro-forestry, and rehabilitate the environment – leading to stronger and more resilient communities throughout Timor-Leste.’

Be part of the change

You can help us in our work by joining Friends of Permatil Global and making a small regular donation. You’ll receive updates about our work and be part of a bigger movement for global change, helping expand our on-the-ground activities and open up access to knowledge and skills for vulnerable communities all over the world.